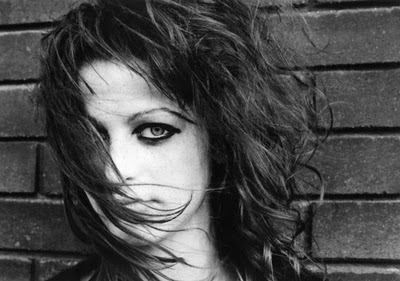 photo by Caroline Coon
I met her mum Nora when she came into the Chrysalis office in 1970. It wasn’t many years later I was watching The Slits on a double bill with Siouxie and the Banshees in Croydon.Sadly its now an obituary. Simon F has written something on his blog http://yammer.blog.co.uk/ that I thought I might reprint below.
“Lead singer of radical post-punk girl-band ‘The Slits’, Ari has a special place in my heart. The reason? I was a member of The Slits for 24 hours. It’s a terribly long story, and one I might write about another time. Suffice to say, they were looking for a drummer to tour with them after the recording of their seminal album ‘Cut’. Budgie, who had played on the record, had commitments with The Banshees, hence his unavailability.

I had met with their then extraordinarily-glamourous guitarist, Viv Albertine, who had checked me out by dragging me to a screening of Samurai movies at The Electric Cinema (light years from being a members’ club). Having evidently passed muster, I was then auditioned at a rehearsal room in Pimlico. Naturally I was terrified, and remember Ari howling and leaping around the room in a sort of free-form scat-toasting capacity, with me trying to figure out what was the verse, chorus or middle eight, only to realise such structures were wholly irrelevant to her. Nevertheless, she took pity on me, was extraordinarily sweet, and announced that I had the gig, only for me to receive the news the next day that the quite-brilliant drummer, Bruce Smith (then of The Pop Group and later of P.I.L), would be doing it instead.

Secretly I was relieved. Ari was on a powerful trajectory that I knew I would never be able to keep up with.

I am delighted to read she kept shining for the rest of her life.”