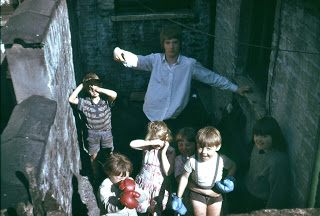 I was clearing out some old files and  found a few photos of me I hadn’t seen in a very long time. I don’t know who took them but I worked out they were taken in 1965 or 1966 when I was at  Manchester university and living in Cornbrook St, Brook’s Bar. It was a tenement, as you can see, that I shared with Chris Wright and a couple of other students. As Chris and I got to know each other we found ourselves most  evenings hanging out together.He was already fully occupied with the local music scene as a social secretary and agent so we went to every club, student dance and concert going, and usually ended our evenings in one of the cabaret clubs, such as Mr Smith’s, where Chris liked to gamble and I chatted to the croupiers.
I began exploring the music scene in Manchester from the moment I arrived there a year earlier. My early discoveries were blues clubs. The Heaven and Hell that catered mainly for dossers and featured  bands like The Pretty Things and The Downliner Sect, and the original blues club The Twisted Wheel. By 1965 The Heaven and Hell had closed, probably because it had a separate side room which was available for sex, drugs and sleeping and the Twisted Wheel was a soul club and the main attraction, with it’s now legendary Saturday allnighters. The Abadi brothers who ran the club printed the posters for Chris’s student union gigs so we were welcome at the Wheel and we were regulars. It was packed with mods from all over, apart from Manchester they came by train from the surrounding towns Rochdale, Bolton, Bury, Wigan, Stockport and Leeds, dancing all night on purple hearts and taking the first trains home on sunday morning. Books have been published listing every act who ever appeared there. No need to try to remember who was on you can just look it up, but there were truly unforgettable nights. The artists who played there, mainly touring American soul artists like Ben E King and Wilson Pickett, experienced an atmosphere they couldn’t find anywhere else and they were incredible performers even when they were doing three shows a night.
Otis Redding’s ‘Otis Blue’ album was just available on import  then and was played constantly in Cornbrook St. It seemed to take over our lives. When Otis sang Sam Cooke’s  ‘Change Gonna Come’ we truly believed that change was inevitable, and most relationships, however brief, had ‘My Girl’ at their heart. It’s not possible to overestimate the influence the blues and soul explosion had on our lives and attitudes. It certainly inspired a lot of British bands who played at The Wheel, bands such as Long John Baldry and the Hoochie-Coochie Men who segued into The Steam Packet, Geno Washington and the Ram Jam Band and Jimmy James and the Vagabonds featuring Count Prince Miller, but really too many to mention. We saw an entire generation of great British musicians for the first time, usually followed by breakfast at the Oxford St cafe. It’s where Chris got his start in the music business, and I soon followed him. 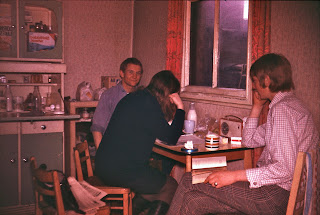 I can remember the excitement of course. In those days Top of the Pops was recorded at a church hall in Fallowfield and Cecil Korer the floor manager was in the habit of dropping in to the student’s union and giving us passes to dance as the audience. I was on television. When I look at the photos of that time I don’t have any idea of what I was thinking, or if I even was. How could I know how long it would last or where it would lead. It was just great to be there and I loved the ride. I wonder what that young man would make of the person I became. I have no way of knowing that of course. Sometimes I suppose you’ve just have to go with the flow.